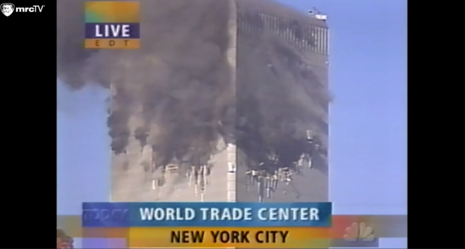 Editor’s note: Three days after the terrorist attacks of September 11, 2001, Media Research Center founder and President Brent Bozell wrote about the horror of the day, the unity of everyday Americans, and the journalists who had to calmly report on the unfolding terror attack, often wondering about their own safety. Here is his September 14, 2001 column:

It’s been a regular staple of Hollywood for science-fiction writers to pen screen plays conceptualizing hostile superpowers of Earth coming together to face a deadly alien enemy. The video of the astonishing attacks on Washington and New York, with commercial airplanes turned into Kamikaze killing machines, was something out of a Bruce Willis blockbuster. This time, however, the violence was very real, and in a moment our nation was transformed entirely, utterly united in defense against this attack on our lives, our fortunes, and our sacred honor.

At a time like this, with so many mourning families, with national treasures reduced to rubble, Republicans and Democrats stood on the steps of the Capitol and broke into a spontaneous rendition of “God Bless America.” The White House spokesman was almost speechless in describing how the President and congressional leaders sat shoulder to shoulder, all partisan differences no longer important, to plot a common road out of this disaster. And then there were those New Yorkers… those supposedly obnoxious, surly, ornery New Yorkers… suddenly transformed into the essence of America at her very finest, defining for all the world to see what real heroism is all about.

But let us not forget another element of our society that performed yeoman’s work under what were truly awful circumstances. Our news media answered the call with professionalism and patriotism. Let us cheer the important and inspiring work done by our nation’s journalists.

One cannot overestimate the importance of their work, either. All of America was hanging on to their every word during the attacks and in their aftermath as it began to crawl out of the wreckage. The press responded with fierce professionalism. Gone was the cynicism — the upturned eyebrow, the sophisticated grin, the pithy rebuttal – meant to signal to the public it shouldn’t really believe the spin it’s hearing. Gone was that ugly competition, the rush to be first with the story, and never mind if it’s true or false. Gone was the glitz. Gone too was the revenue: the networks have surrendered hundreds of millions of dollars in advertising revenue in order to bring continuous coverage to the public.

It is difficult to fathom the pressure on a journalist, particularly the on-air reporter, at a time like this. On television, the anchors earned their name by staying calm and weighty when hysteria came naturally. Consider one incident, at the height of the crisis, just after the third plane had slammed into the Pentagon and no one, but no one knew what to expect next. I was amazed as I watched Fox’s Brit Hume quietly, soberly, but with the necessary urgency, relay that D.C. police were warning him there was another airplane roaring up the Potomac River at a high rate of speed.

If true, its target might well have been the U.S. Capitol, right across the street from Mr. Hume’s broadcast booth. Luckily, like other whispers of additional tragedies, the threat didn’t materialize. Still, how hard it must be at a moment like this, sitting in front of millions and relaying the latest reports while resisting the natural impulse to duck and cover, or scream in fear or anger, or just lose your lunch. MSNBC’s Brian Williams underlined that this crisis would test the mettle of President Bush. Yes, but it’s also tested the mettle of our nation’s media stars – and they passed with flying colors.

It wasn’t always so. Ten years ago, another President Bush said savage aggression would not stand. The attack was on the small, oil-rich emirate of Kuwait. As American men and women made their way to the war zone, the media felt pressed to be patriotic, but opponents of American power on the left fussed that reporters shouldn’t descend to referring to the nation as a “we,” as in “how are we doing?” Journalists were challenged to rise above mere citizenship, to sit at a distance, on the sidelines, and report like a gaggle of European sophisticates that the entire Gulf War was a greed-addled fraud. Ten years ago, Charlton Heston had cause to quip at CNN, “Who do you think you are? Switzerland?”

But in the unforgettable present, as now our own land has come under attack, as our own citizens have died needlessly in collapsing heaps of metal and cement, as the crushing reality hits that our very freedom is now imperiled, our national press corps has responded, showing that in a real crisis, they are the best of the best. I know I speak for millions when I offer a heartfelt thank you to our entire national media for their sobriety, their sincerity, and their refreshing sense of national purpose. Like all our leaders, they have responded to tragedy by showing us how to display the best of ourselves when we’re feeling the worst.