Exclusive: When Jimmy Greaves took punch in the ribs from Mike Tyson as late Tottenham great interviewed boxing legend on Saint and Greavsie 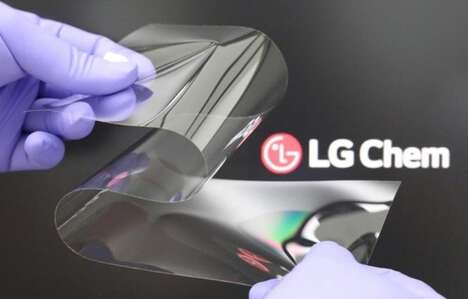 The LG Chem Real Folding Window is newly developed material from the research arm of the technology brand that is focused on the future of folding technology. The material has been engineered to be as flexible as plastic but hard as glass to make it well-suited for use as a screen covering. The material is said to be durable enough to be folded and unfolded as many as 200,000-times, depending on the application.

IT Materials Division Leader, Vice President Chang Do Ki spoke on the LG Chem Real Folding Window saying, “LG Chem developed new technologies that can be used for foldable displays using new materials technologies and its accumulated coating technologies as it enters the next-generation materials market in earnest. Regarding this, LG Chem announced that it had developed the cover window for foldable IT devices called ‘Real Folding Window’ that applied specially developed coating materials to make the surface as hard as glass, while the folding parts as flexible as plastic. Unlike existing polyimide films and tempered glass-type materials, the cover window that applied LG Chem’s new coating technologies will maximize flexibility, while also providing optimized solutions for foldable phones such as making improvements to chronic issues like fold impressions on the connecting part of the screen.”