Exclusive: What Happened When an Entire Town Went Full Crypto

Exclusive: ‘I’d be in prison for that’ – Mike Tyson watches video of Deontay Wilder beating up bully in gym with Andy Ruiz Jr and former UFC champion Henry Cejudo

Exclusive: Wales qualify for Euro 2020 knockout stages – despite defeat to Italy in Rome

Exclusive: Kevin Hart’s Netflix feature Fatherhood draws into an endless well of sympathy from the audience 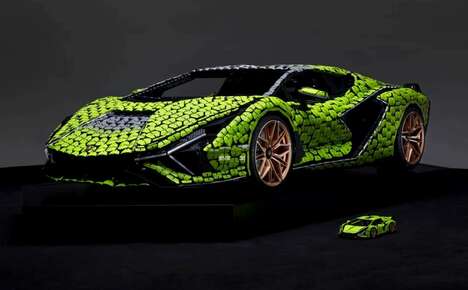 After 8,660 hours and with over more than 400,000 LEGO bricks, Lamborghini built a lifesize replica of its Sian FKP 37. Overall, the LEGO-built sports car weighs an incredible 2.2 metric tonnes. Last year Lamborghini and LEGO partnered up to create a 1:8 replica of the exact vehicle. This year, however, the co-creators decided to push their limits with this realistic version.

A team of 15 dedicated people constructed the automotive beauty. While the team meticulously built the car’s frame from LEGO Technic pieces, Lamborghini’s signature logo and wheels are practically the only elements not made from LEGO bricks. Surprisingly, the headlights, taillights, and the light stripes along the Sian’s side are also made from LEGO pieces.

Exclusive: What Happened When an Entire Town...